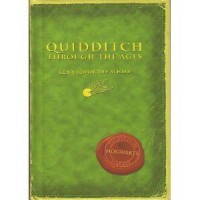 Madam Pince, our librarian, tells me that it is “pawed about, dribbled on, and generally maltreated” nearly every day – a high compliment for any book.

I liked this one A LOT better than Strange Beasts (caveat: my digital copy didn't have the margin notes, so it lost the meta gold extra). Anyway, Bestiaries are good for curiosity, but this one was just plain entertaining. The tong in cheek tone was great, and the amount of laughters it pulled from me with the shenanigans involved in the rules creations, and the fouls mentions can't be counted. I mean:

The full list of these fouls, however, has never been made available to the wizarding public. It is the Department’s view that witches and wizards who see the list “might get ideas.”

Refereeing a Quidditch match was once a task for only the bravest witches and wizards. Zacharias Mumps tells us that a Norfolk referee called Cyprian Youdle died during a friendly match between local wizards in 1357. The originator of the curse was never caught but is believed to have been a member of the crowd.

That last is naturally taking "cursing the referee" to it's expected literal end, and those are just fast examples.

I got the edition with the History of the World Qudditch Cup and the the 2014 articles, which was just the cherry on top. Aaand also very fitting in timing *grin*